Reflections of Chaco Canyon by our inspirational guest, John Anning who joined us on our September 9th-10th, 2018 Chaco Canyon New Moon Glamping Tour. 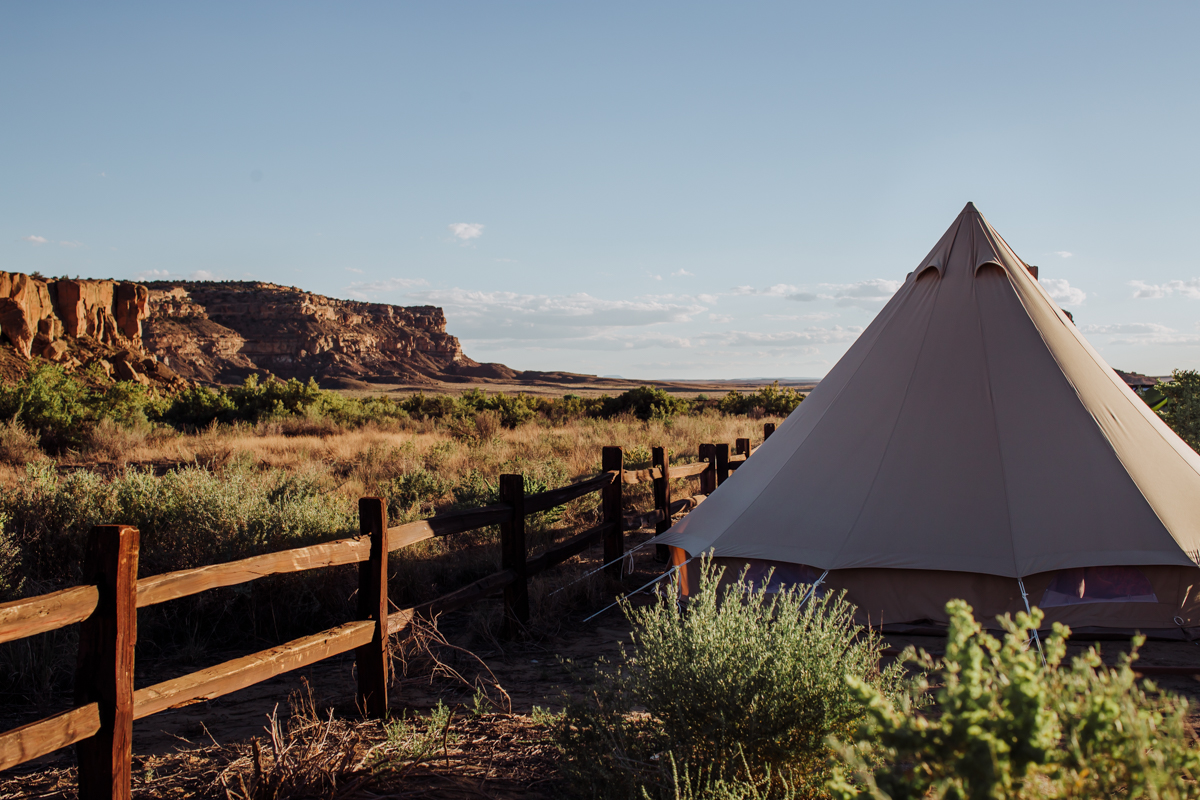 They tell you about the 16 miles of rutted dirt road. We are headed to Chaco Culture National Historic Park from Albuquerque. I have thought about this adventure for years, but I didn’t do anything until it transformed from a want into a need.

Chaco is a UNESCO World Heritage Site, and an International Dark Sky Park. Worthy of tour busses, hotels, cabins, and restaurants, like Yosemite or Grand Canyon. But no. That must be why the road isn’t paved, and why they tell you to beware. No one wants you to go, unless you need to go.

There is no potable water at Chaco except at a funky pump at the visitor’s center. No showers. No shade. It gets very hot in summer and cold in the winter. The record high is 113, the record low is -38. It scalds and it snows. It is bone dry, and then a monsoon will sweep through.

These aspects of inhospitality create isolation, and quiet, and aloneness. Several of the people I am traveling with came here decades ago, and although they are each experienced world travelers, Chaco Canyon continues to draw them. Tam fell in love with it, has visited often, and was a Summer Ranger for two years. Angelisa camped here for a month straight, and couldn’t tear herself away. Carolyn, who was the curator of the Georgia O’Keeffe museum in Santa Fe for ten years, has been here too many times to count, starting when she was a grad student in the early 70’s.

I’m only in Chaco for 24 hours. Noon to noon. We hike among the ancient dwellings, learn about the Chacoans, and keep looping back to the visitor’s center for more water. Tam is great. She doesn’t exaggerate; she speaks from her years of experience and knowledge. She suggests contradictions to some of what I have read, and says “But no one knows”. She tells us that the artist’s rendering of Pueblo Bonito in its prime doesn’t make sense to her. She says that she thinks the early estimation that 20-30,000 people lived here also doesn’t make sense. She says she thinks it was more of a convention center where the Chacoans would gather for rituals and trading, maybe a couple times a year. Her reasoning is that there would never have been enough water to grow crops to feed thousands. Mystery has great power for many of us. We crave the mystery, and then we crave explanations. Tam seems sober in her acceptance of mystery, and I like that. No one knows. I’m drawn toward this idea of not knowing. Needing to know isn’t why I am here. I’m not going to understand this place in any universal way, I won’t become an expert.

The tour continues. We walk a lot, and listen a lot, and I get hot and tired. When we get to our campsite, Tom, Tim, and Angelisa have created a beautiful camp with tents, beds, and an outdoor kitchen. We each have a personal tin bucket with wipes, tissue, a flashlight and a towel. We freshen up with the not-potable water in the bathroom. One thing that registers is that we all came with a strong intent. We all needed to be here. 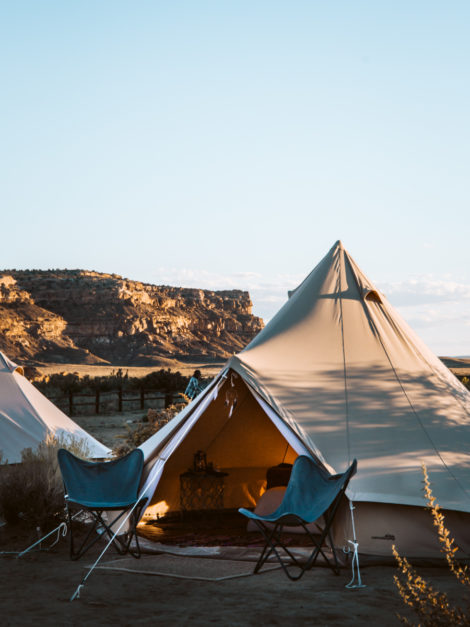 We drink New Mexican wine, and eat Angelisa’s fantastic home-cooked dinner. We have some chocolate and some more wine, and Tim plays a little guitar and sings. Angelisa passes out sparklers – Yes, those Fourth of July mini-fireworks, and we light them in the fire. Angelisa is all about the details.

We laugh. Our guards are coming down. Very early, we let the fire die down because the planets and the stars are emerging. Mars, Venus, Jupiter, and Saturn, spread in a perfect arc. As it gets darker, the Milky Way bisects the sky from Southwest to Northeast. I have occasionally seen such bright stars but never in such a huge sky.

We all go to bed by 10:00 and everyone later says they got up 2-3 times during the night to look at the sky, and to watch the Milky Way turn, and Orion dive toward the horizon.

At 5:45 I hear Angelisa stirring and heating water. We have agreed to be up at 6:00 and on the trail by 6:15. We have flashlights and go-cups of French roast at the appointed time and we hike up a rocky trail to the cliff top to watch the sunrise light up Fajada Butte and the adjacent clouds. There is a chilly breeze just as the sun cracks the last of nighttime, across the broad canyon. I haven’t watched the sunrise on purpose, for pleasure, for nearly half a lifetime.

For the next few hours we eat more, talk more, laugh more, hike more, learn more, and then it’s time to go. No mysteries are solved. Not who the Chacoans actually were, not how they got logs from a forest 60 miles away without wheels and horses. Not how a cluster of strangers can form fast temporary kinship with no thought of future reunions. Not whether I will retire sooner or later, or whether there is something I can do to feel better physically.

Here in the vast magical nowhere, I feel an accurate ambivalence: very small but too big. Very old, but with a bit of youth in my heart. Very capable, but inconsequential. It’s all as mysterious as ever, and I will live with that.

24 hours after I get home I am looking at pictures and maps, and thinking I might need two nights next time. And I will need to train if I want to hike all the way to the dwellings at Penasco Blanco.

Chaco, her big sky, my new friends, and my amazing hosts have reeled me in. 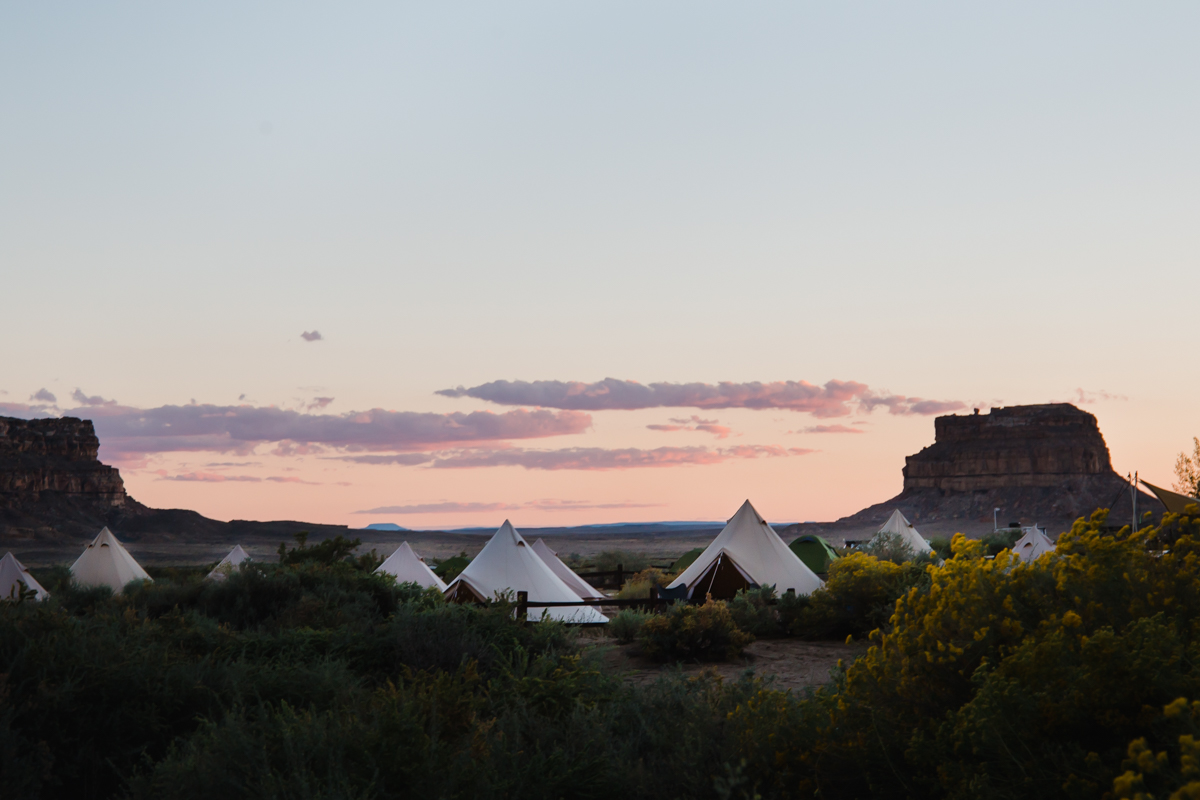