Beneath the eastern flanks of the Jemez Mountains lies the Pajarito (Spanish for “little bird”) Plateau where dynamic geological forces weave the story of migration and settlement of ancestral Pueblo Peoples. Join us as we explore and hike within two areas of Bandelier National Monument, which encompasses 33,727 acres of volcanic ash known as tuff.

We journey northwest of Santa Fe to visit Tsankawi, the story of an ancestral Tewa People that began in the 1400s. The Tewa constructed their homes into the volcanic adobe rock and cultivated their fields in the open canyons below. You can explore the low stone walls, the etched drawings in the rock faces (petroglyphs) and follow the ancient pathways carved into the porous tuff. Raptly, you’ll walk the timeless 1.5 mile path where echoes of the past intersect with the present and where you’ll see spectacular views of the Jemez Mountains all around you, as well as the Sangre de Cristo Mountains to the east and the Sandia Mountains to the south.

Following your exploration within Tsankawi we will shuttle our way 12 miles south to the entrance of Bandelier National Monument. As we wind our way down into Frijoles Canyon, be sure to notice the evidence of human activity dating back more than 10,000 years. Adolph Bandelier, an anthropologist from Switzerland who first visited in October of 1880 remarked, “it is the grandest thing I ever saw.” 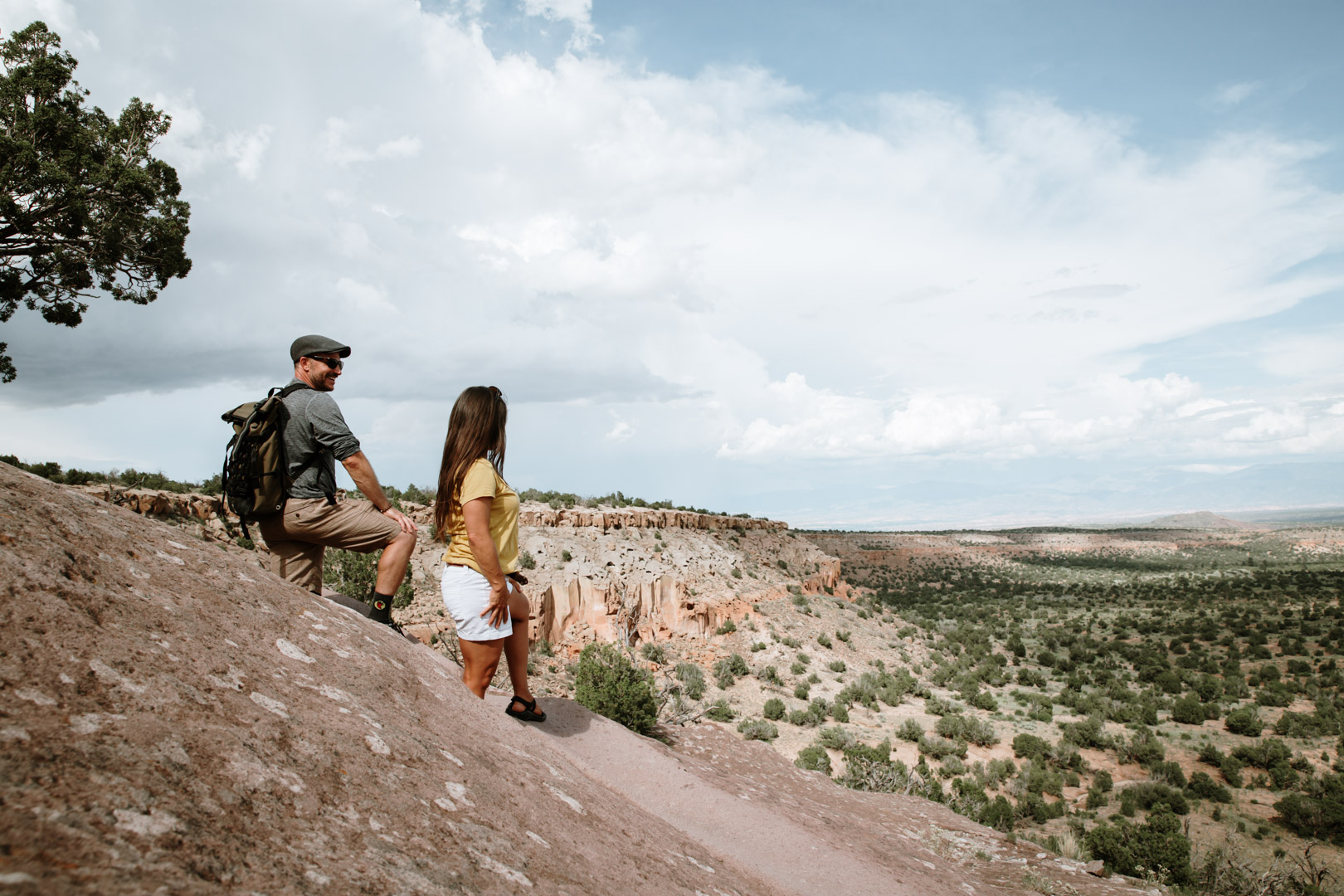 Before embarking on the next phase of your tour, enjoy your packed lunch beneath the shady Frijoles Creek cottonwood trees outside the Visitor Center.

Then after lunch, starting at the Visitor Center, you will explore and hike 1.25 miles through this archeological and wilderness preserve where deep sheer walled lush canyons and wide-open vista mesa tops unveil an ancient civilization that cultivated the earth, built homes on the valley floor, and resided within the cliff dwellings of the canyon walls.

As you make your way on the paved path to visit the village of Tyuonyi, you will contemplate how the one to two story high cliff dwellings contained about four hundred rooms and housed approximately 100 people. Continuing along the trail you wind your way up into the cliff walled houses, classified as cavates, where most had stone rooms built in front of them called Talus Houses. Our hike culminates alongside the Long House where the people built multi-storied abodes along the cliff base and carved petroglyphs into the cliff.

Finally, you’ll return to the Visitor Center along the nature trail and through the fragrant old growth ponderosa pine forest.

On our drive back to Santa Fe, you can continue to learn more from your guide about the dependents of Bandelier as well as the modern-day pueblos of San Idlefonso, Santa Clara and Cochiti. With a full-day of explorations behind you and the rising mid-day heat, the echoes of gorgeous New Mexico vistas, the imagined visions of ancient peoples’ ways and the need to sort through endless picture files, will be foremost in your mind. 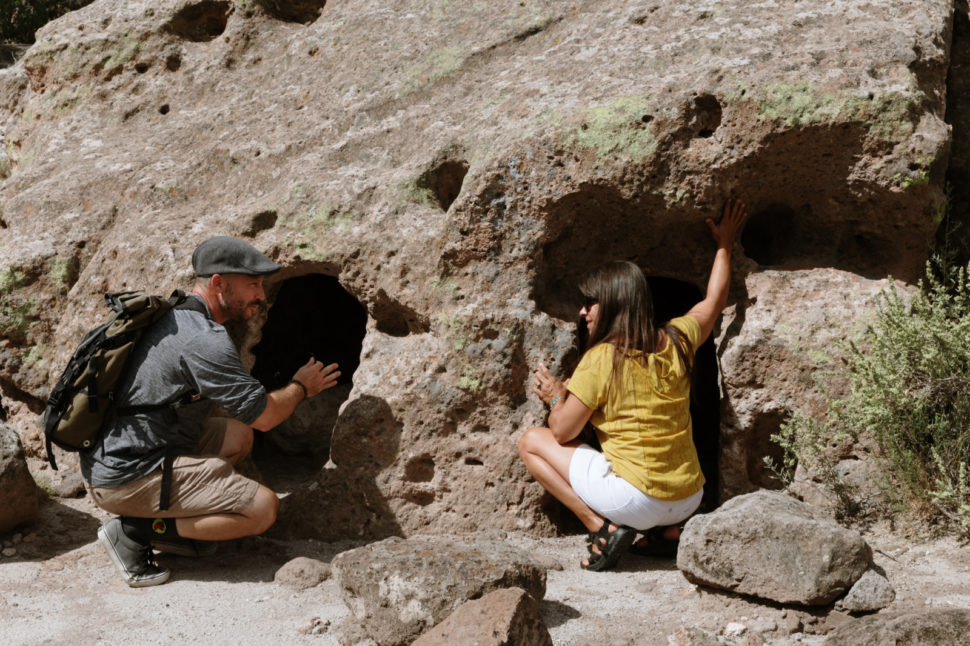 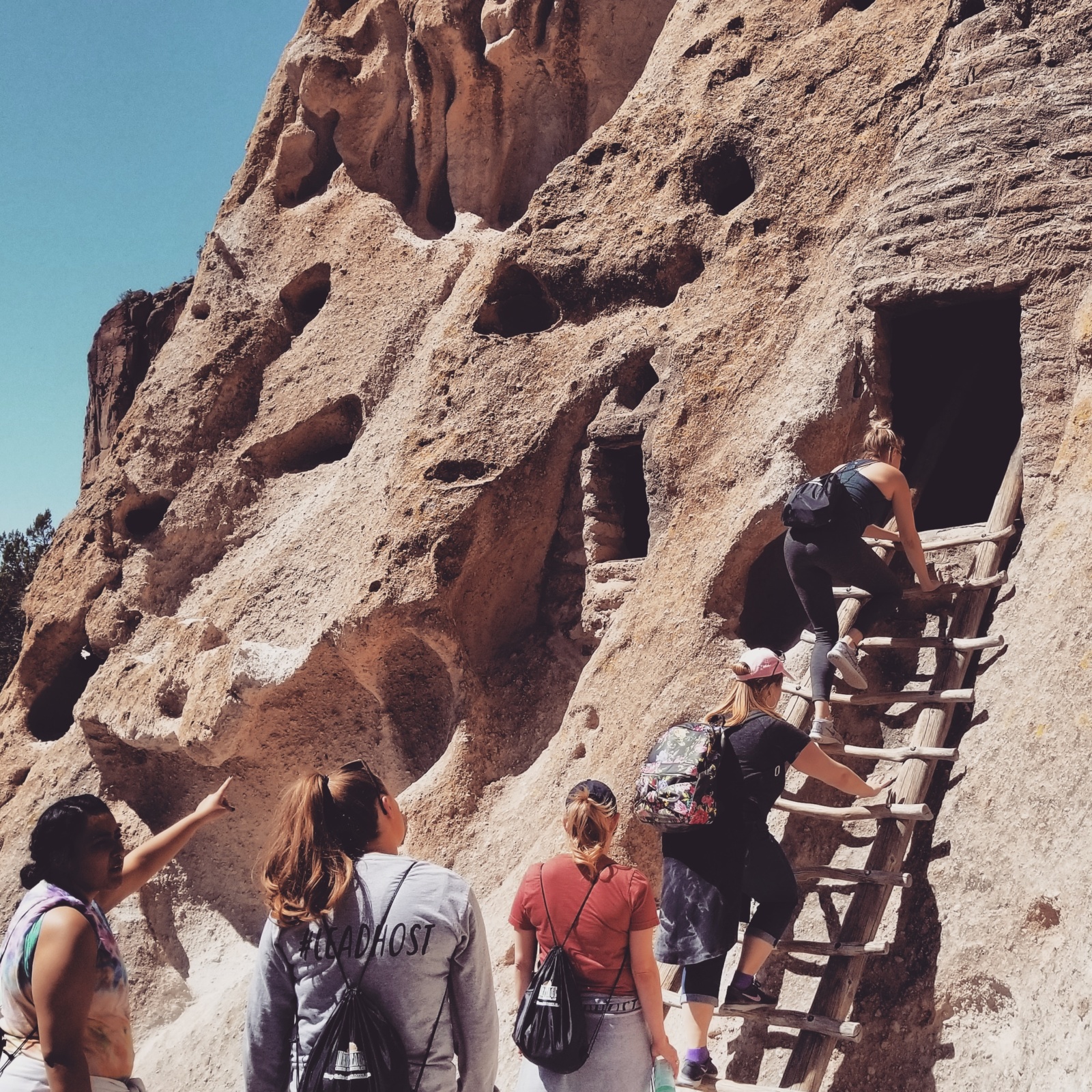 Involves some climbing and narrow places between rocks. We will climb 3 ladders along the trail.

Hiking along paved trail and inclines on narrow stairs up to experience Cliff Dwellings and the Long House.

Bandelier National Park is located 50 miles north west of Santa Fe. Our drive will be 1 hour each direction. 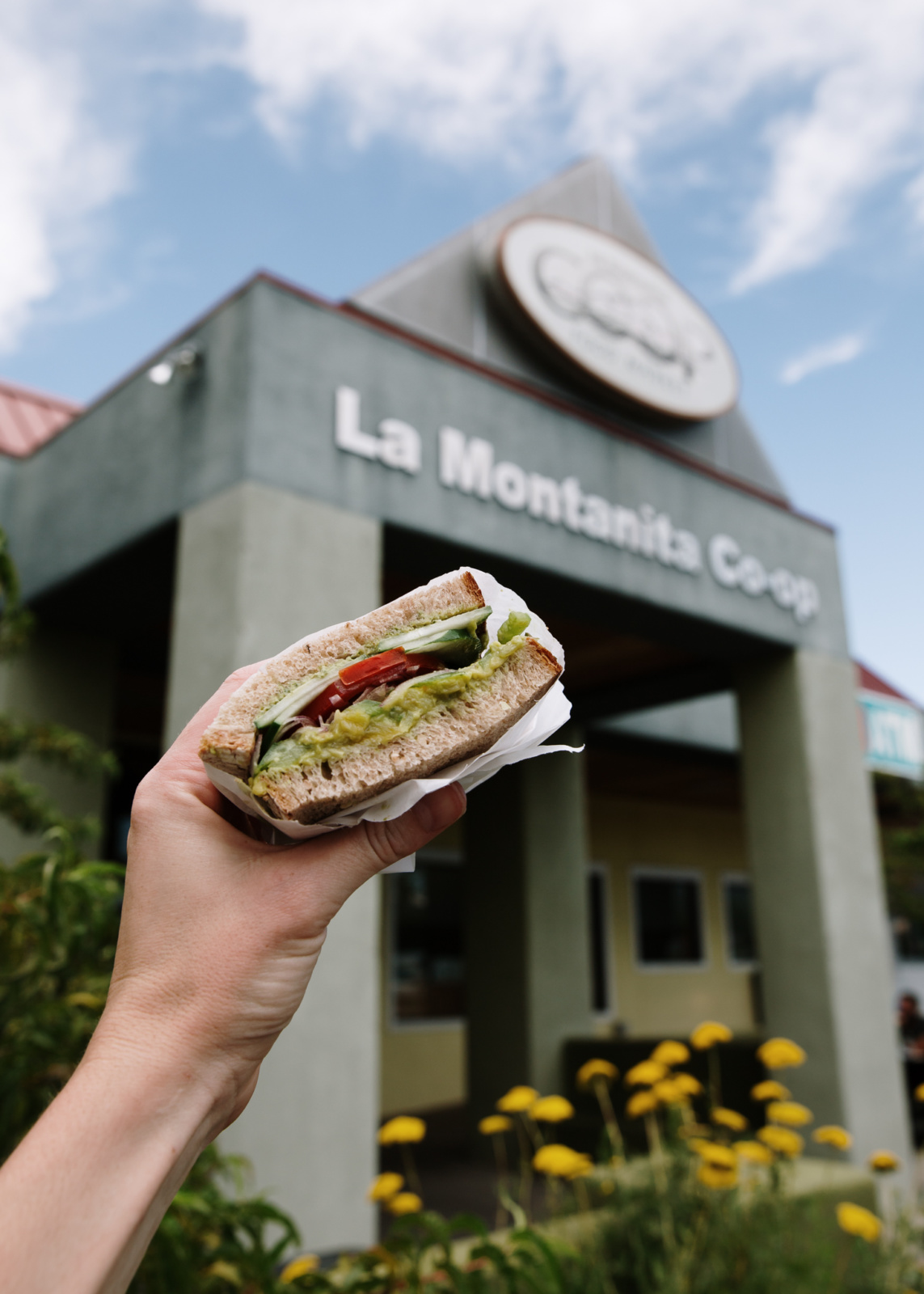