Beyond the Itinerary- Chaco Wonderings

At sunset the rocks come alive at Chaco Canyon. In the golden light of evening, Tiki-like faces appear by the hundreds on the angular cliff tops, each staring off at a distant horizon, as if pondering the mysteries of this otherworldly landscape.

Chaco Culture Historical Site abounds with mystery: who were the people that built this massive sandstone complex set in the great bowl of the San Juan Basin of northwestern New Mexico? How did they manage to create a sophisticated society in such a seemingly inhospitable region? Why did they leave?

Over many, many visits, beginning in my college years, circa 1977, I have explored these enigmas. I have been intrigued by the history and culture of the people who settled here and humbled by the awesome expanses of stone, high plains, and sky.

I remember coming in on the old road from the north, at Nageezi with a college friend. There were no signs and we got off track a few times. The descent into the canyon was a challenge but we emerged right in the heart of the complex, with the ancient stacked stone buildings to left and right, silent testimonies to the Chacoan people.

That evening we camped up against a sandstone bluff and there was a chill in the night air. A small fire crackled and provided warmth as we cooked a steak in a frying pan and roasted a few seasoned potatoes. The stars came forth in a blaze across the black sky, and in the first light of day we watched a herd of deer – almost unseen – slip through the canyon sage. Later in the morning, en-route to the mesa-top site of Penasco Blanco, we climbed ancient steps cut into rose hued cliff bands leading upwards toward the rim. We discovered remnants of pottery, probably water vessels dropped over a thousand years ago. 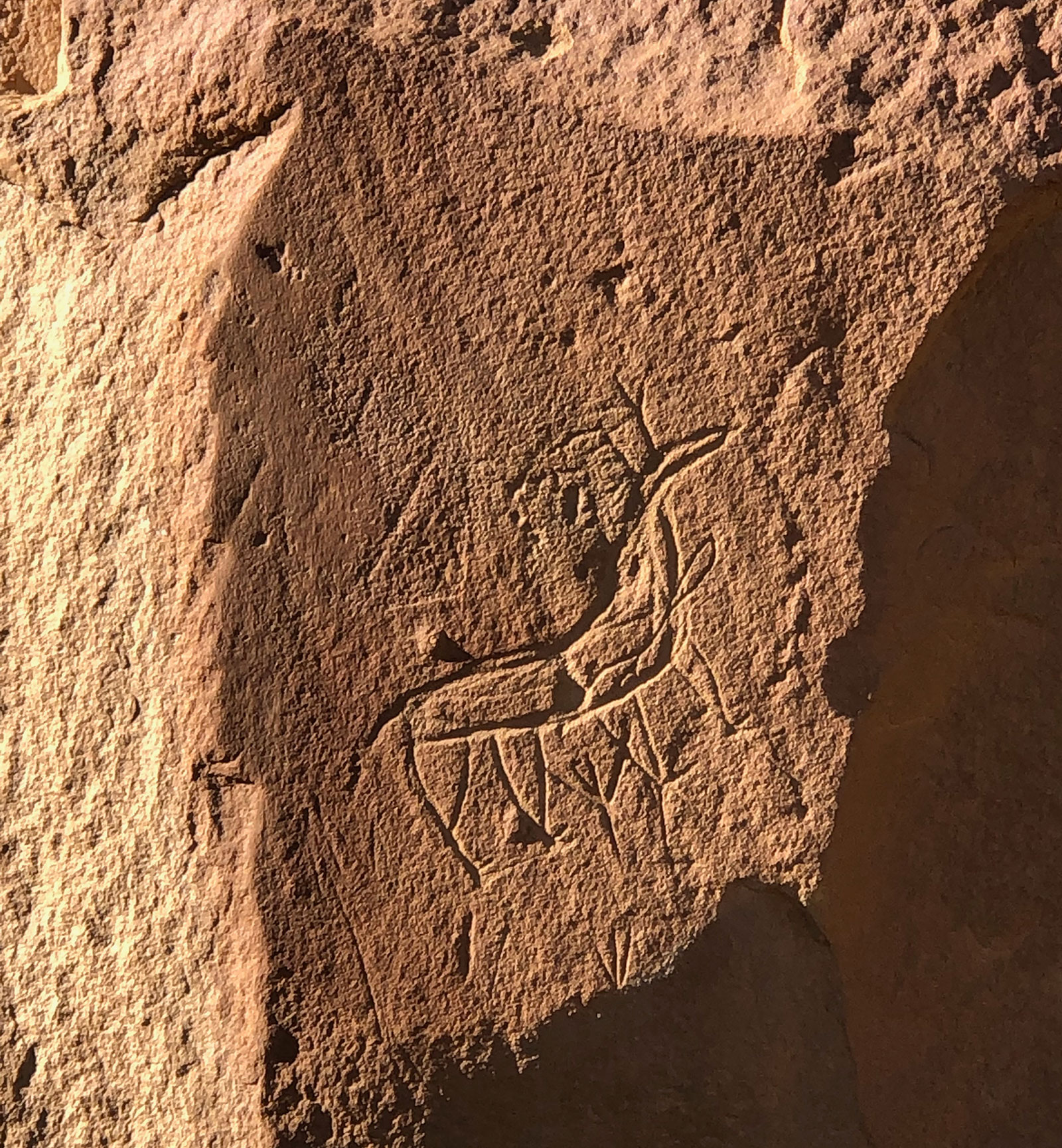 Around every site of Chaco, pottery sherds lay scattered on the ground, whispers from a distant civilization. The Park Service has picked up most of these artifacts for preservation and actively discourages visitors from collecting them to bring home. But even today, a sharp eye on the ground will turn up pieces of the distinctive black-on-white Chacoan pottery. We returned from our excursion wide-eyed and energized.

In addition to Penasco Blanco, many of Chaco Canyon’s backcountry trails lead to remote sites like Tsin Kletsin and Wijiji. In this rugged outlying landscape, one has the opportunity to experience profound solitude and gaze in wonder at the remnants of stonewalls, three stories tall, rising against the turquoise sky.

During our June 2021 H.I. Glamping Adventure to Chaco, guests and guides participated in a group ceremony, an observance of the rising sun on the equinox. We watched with silent reverence as the first ray of light peeked from behind the canyon rim and passed directly through the two main doorways of the building known as Casa Rinconada.

Casa Rinconada, like all kivas, is round and sunk into the earth. It functioned as the primary ceremonial center for the entire Chacoan world, and is the largest kiva ever found in the American Southwest. Once Casa Rinconada had been covered with pine trees and dirt. The only feature rising above the ground was its elevated stone entryway. For generations the equinox sun has perfectly illuminated  these sacred passageways. 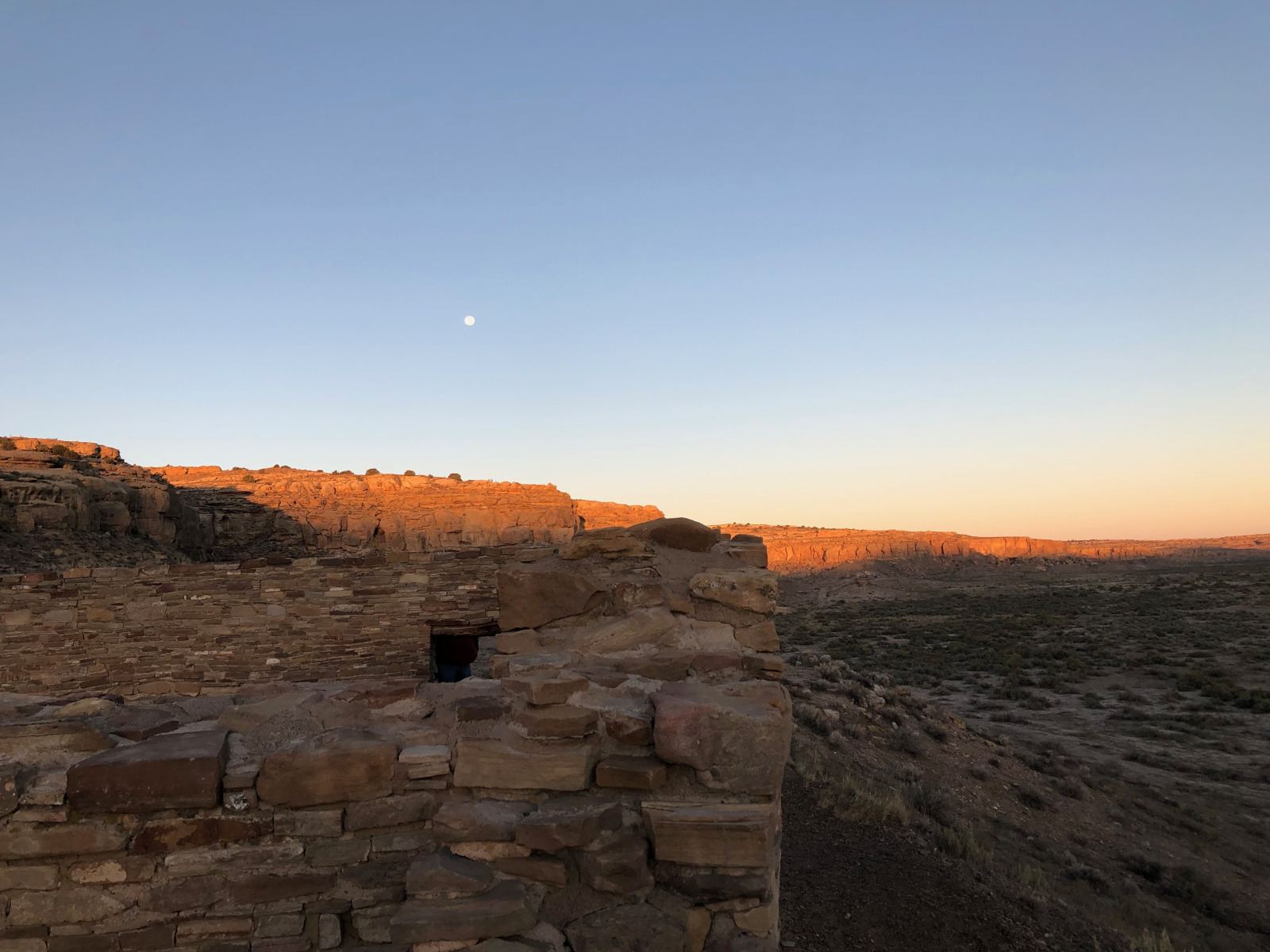 Immersed in this ceremonial space, it was a profound morning for all of us, revealing Chacoans’ precise knowledge of the movements of the sun and their intentional orientation of the entire complex of buildings to the surrounding terrain and the cosmos.

The buildings of Chaco align accurately to the great axis of the cardinal directions, moon cycles, and the universe. Sacred geometry informed and directed this complex, yet something was not right here, as their civilization dispersed and was scattered to the four winds. Another mystery.

Join Heritage Inspirations for one of their rich immersive experiences and explore the many questions of Chaco. Breathe in the rain-soaked mesas, find the pictograph that records the supernova of 1054, wiggle your toes in sand, climb on sun baked rocks, and wonder.

Responses to David and Stacy Silver