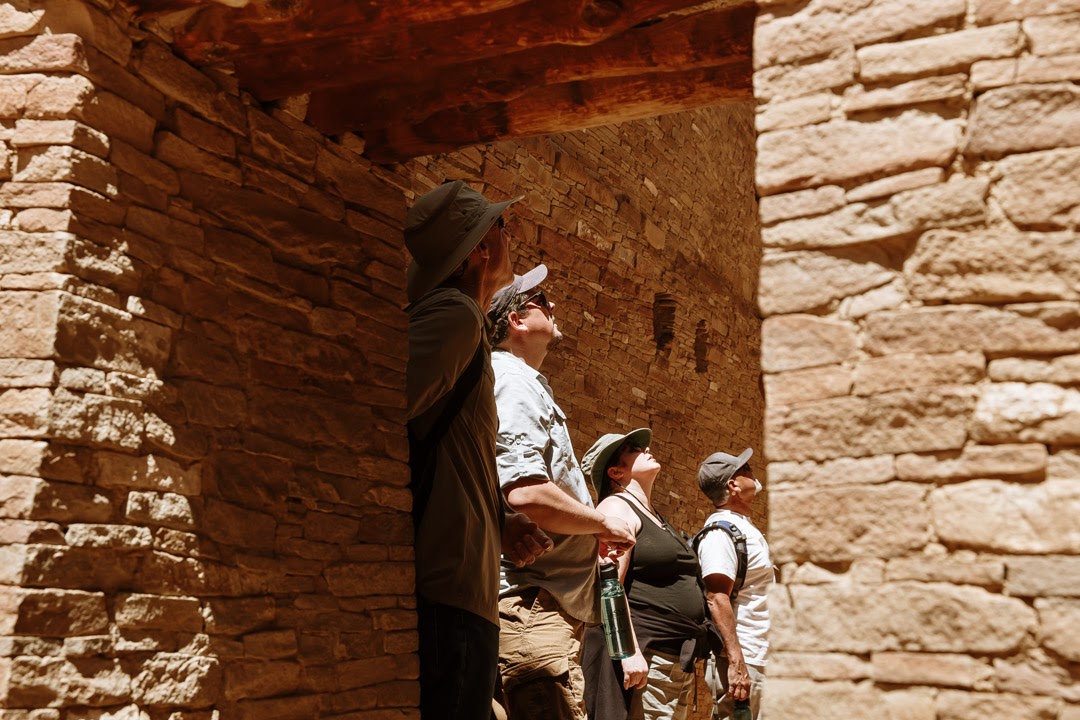 The Puebloan people began to build in the canyon on a grand scale around 850 C.E. and construction of their Great House Pueblos continued for over 300 years. Their architecture design was pre-planned and many of the great houses were built over decades and even centuries.

Our day trip begins early in the morning. Shortly after the first light illuminates the eastern horizon and where the earth meets the heavens. I greet my guests and we enjoy a hot cup of tea or coffee. Everyone’s eyes are still opening and it’s clear their hearts are full with anticipation. I welcome my new friends and give them an overview of how our day will unfold and head out on one of the most enchanting drives through north western New Mexico.

As we venture from the modern world that is Albuquerque, the scenery and landscape changes drastically and proves that Albuquerque is an amazingly easy launching pad to phenomenal outdoor locations. We pass through what I call checkerboard land, some privately owned, some part of the Bureau of Land Management and some that still belongs to the local Native American people. This was all theirs once and the spirit of the land still knows this. We pass by sacred lands like Zia Pueblo, one of the 19 pueblos of New Mexico that traces their ancestry back centuries and beyond to Chaco Canyon. Chaco was the epicenter of the Ancient Puebloan people.

Desert pygmy forests of piñon (dwarfed pine) trees and varieties of healing sage brush pepper the landscape as we climb from 5,312 to 7,379 as we cross over the continental divide and descend again to 6,200 feet in elevation. Pygmy forests grow 35 feet tall as we pass over the Jemez Mountains and the Nacimientos Mountains that the Native American people say is the birthplace of all the water in the area. These are two of the many mountain ranges that tall timbers of ponderosa pine were cut and hauled on foot upwards of 70 miles to Chaco Canyon to help construct the Great House Pueblos. The Puebloan people began to build in the canyon on a grand scale around 850 C.E. and construction of their Great House Pueblos continued for over 300 years. Their architecture design was pre-planned and many of the great houses were built over decades and even centuries. The great houses remained the largest buildings on the North American Continent until the Industrial Revolution.

Everyone asks “Why here?” There are no natural resources for a society to thrive here and yet they did. They must have been spiritually guided to bring their culture here. And why did they leave? 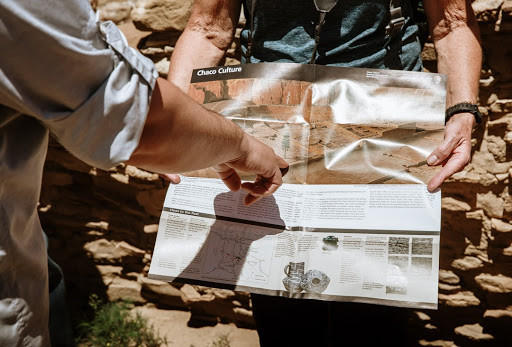 To reach the shallow canyon our paved highway must be left behind as we venture on a winding 28 mile road that leads us over the Escavada Wash which is a tributary of the Chaco Wash in the canyon. It is near here that you will realize how far away from home you are and how remote of a place Chaco Canyon really is. This canyon was the epicenter of the Ancient Puebloan culture. A ceremonial and economic midpoint for their society. So everyone asks “Why here?” There are no natural resources for a society to thrive here and yet they did. They must have been spiritually guided to bring their culture here. And why did they leave?

Today the descendants of Chaco, two of the oldest living pueblos in New Mexico are Taos Pueblo & Acoma Pueblo. Both Pueblos tell legends of when they left Chaco Canyon in search of a new place to call home. The people of Taos Pueblo say that they followed a soaring eagle from light to dark for a great time and each day when the sun woke in the East they followed the eagle again. The eagle led them to a great water source we now call the Rio Grande. When their people reached the water source the eagle led them North day after day and night after night through the mountains. Near the tallest peak in the land a stream parted from the river and two feathers fell from the eagle in the sky and landed in the sand. The native people knew that this place was special and it would be their new home.

The Native people of Acoma pueblo left Chaco Canyon too and spoke to the land in search of a new home; a place where the land would talk back to them. They shouted into the land Haak’u!! A word that meant “a place prepared.” They shouted it over and over day and night until they reached a large sandstone mesa and their shouts, or questions were answered and echoed back to them. They knew this mesa was Haak’u, their home. These legends have been passed down from grandparents to parents and from parents to children for over a thousand years. I’m certain that there are stories that were passed down about how the ancient Puebloans arrived in Chaco Canyon. 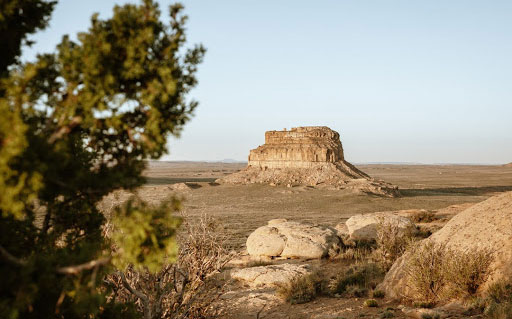 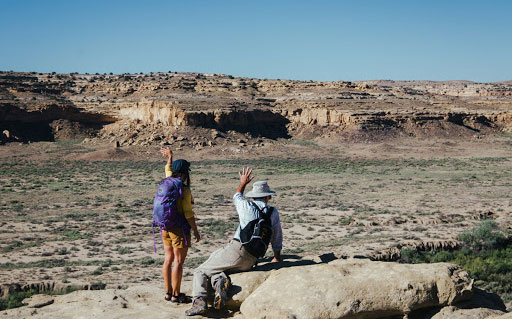 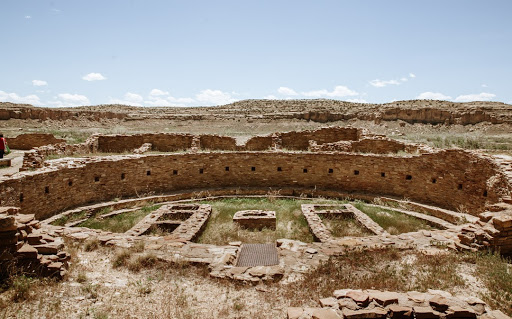 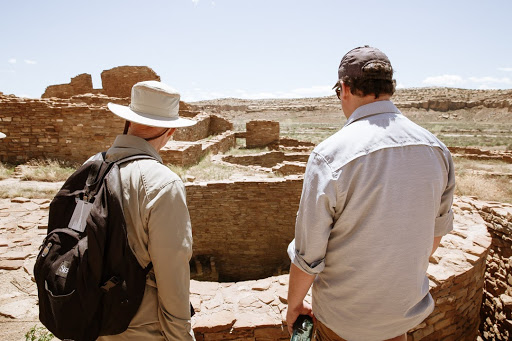 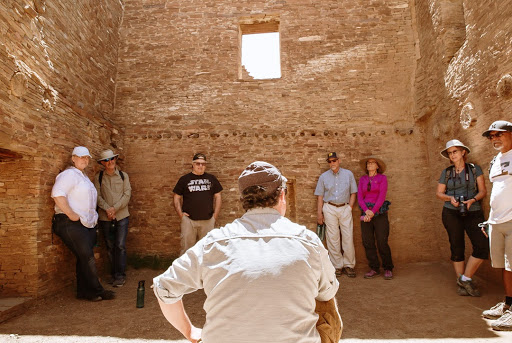 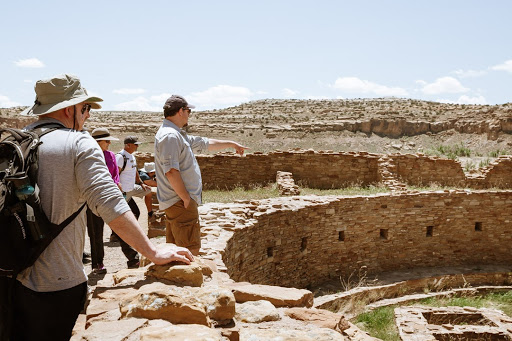 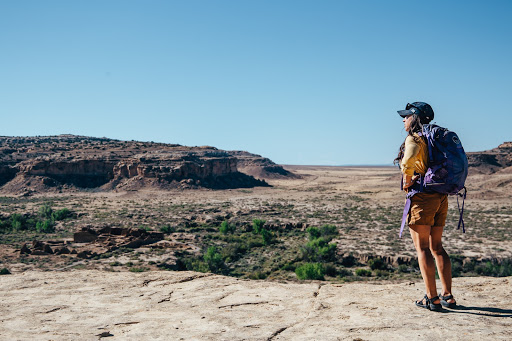 These walls were built for people by people. The light that pierces the windows and doorways of these magnificent structures is never the same twice and every time I visit Pueblo Bonito or any of the great houses I feel like I am seeing them for the first time.

When arriving at Chaco Canyon we are welcomed by Chakra Mesa and the majestic Fajada Butte. A natural geological formation unlike any other in the area, that rises 135 meters above the canyon floor. This is home to the solstice petroglyph, rock art that indicates the sun’s path in the sky on the Equinoxes and Solstices. This is one of the most significant petroglyphs created by the Ancient Puebloans. Visitors are no longer able to visit the site but as we walk between the Great House Pueblos we will see many other significant petroglyphs.

The highlight for many guests is to visit Pueblo Bonito, the largest and most excavated of the great houses. Pueblo Bonito once stood 5 stories tall and upwards of 500 rooms. The building is constructed of wooden timbers and sandstone that was quarried from various places throughout the canyon. When we navigate the narrow corridors and small earthen rooms one cannot help but feel humble and at peace. These walls were built for people by people. The light that pierces the windows and doorways of these magnificent structures is never the same twice and every time I visit Pueblo Bonito or any of the great houses I feel like I am seeing them for the first time.

Our day is spent having insightful discussions about the history of the Puebloan Native Americans. What life may have been like one thousand years ago in Chaco Canyon and all that they achieved in a short period of time. The more questions that are answered the more questions we have. Chaco Canyon is an experience of a lifetime and we are blessed to make a pilgrimage to the sun scorched desert and connect with a culture that may have left the canyon but has carried forward the ancient traditions and stories for centuries.

Anyone can travel on their own to Chaco Canyon but you cannot experience the insight on your own the way you can with Heritage Inspirations.